After a rather dismal DNF at the Springbank Road Races, I was seeking some redemption at the K-W Classic, which was also serving as the Ontario Provincial Championships. I had been able to make it out to 3 local crit/road race events with the London Centennial Wheelers in the interim, and felt like the experience was very valuable. That said, each of these saw me either spat out the back of the pack or finishing at the back of the lead group. Therefore, the goal going into the K-W Classic was to just finish in the lead bunch.

The course was 5 laps of 12.7 km, for a total of 63.5 km. However, the main thing that everyone was talking about was Hawkesville Hill, a short but steep leg burner in the last couple kilometers of each lap. Between the race distance and the climb I knew it would be stretching my ability to be in the bunch at the end, but no harm in trying, right?

As you can see from the Strava speed above, the pace was absurdly all over the place…basically the opposite of a triathlon. Morning Glory Cycling Club had something like 9 riders in the race, so they controlled the pace a lot on the front, which meant that no one was really interested in pushing it too much into the wind. However, at each corner there were significant accelerations, also at the downhills and through the finish area where the crowds were. In the end we averaged 38.2 km/h over the 63 km. 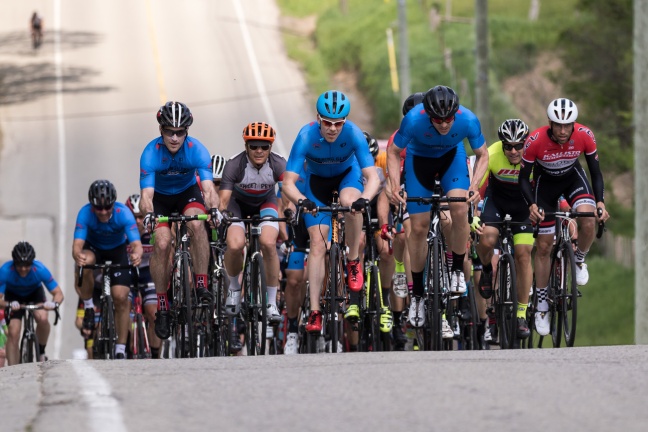 For the first couple of laps I was feeling good and stayed out near the front to stay safe from any crashes. I led up the hill on lap one, and near the front on laps 2 and 3. A couple riders tried some attacks but were shut down relatively quickly on the windy sections. This actually led to one of my favourite moments from the race:

Chris Herten from Peterborough Cycling Club was very strong and very active over the first several laps, making most of the breaks. On lap 3 he had a solo break and got some distance on the field (see the picture below). I was on the front with a Morning Glory rider and suggested that we not rush to close the gap, thus leaving Chris out on his own to try to tire a clearly strong rider. He agreed, but as we rolled around another rider came to the front and immediately kicked up the tempo to bridge the gap. I made the same suggestion, that we not rush to close the gap and rather let the break-away rider suffer. This rather large, muscly man replied “IF YOU’RE SUFFERING AT 25 KM/H THEN YOU’RE A FUCKING JOKE.” I calmly responded, “It’s just a suggestion, take it or leave it. If you want to go get him we’ll gladly follow you.” Funnily enough when we hit the hill on lap 4 I saw captain testosterone there going backwards rather quickly, and unfortunately he registered a DNF. Maybe if he had saved some energy not yelling at people trying to work with him… 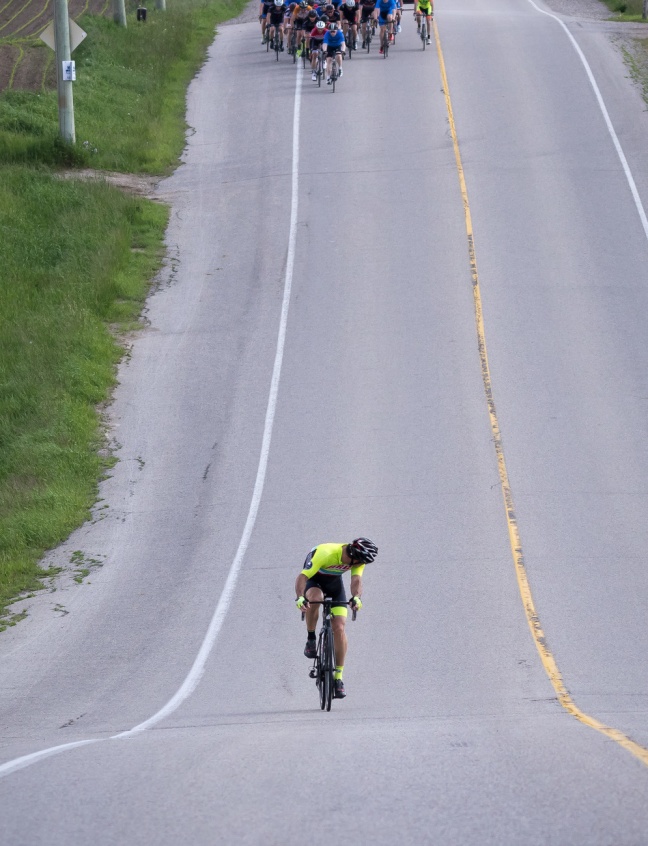 Anyways, back to my race. By lap 4 I was feeling the pain and found myself drifting down the pack, almost gapped after the climb and having to use the finish straight section to move back up the group. Lap 5 was more of the same, and by the final climb I knew I wasn’t going for the win, and would need to dig very deep to hold the pack. It was going to be all about position around the final corner and I sure wasn’t going to have it.

However, around the last corner I was just off the group, as people started rapidly dropping off. With a final push I was able to just grab onto the end of the lead riders and come in at 26/45, but most importantly registering a time of 00’00” (in cycling your time is calculated as your time back from the first rider to cross the line, and every rider in the same contiguous pack gets the same time). So, mission accomplished of finishing in the lead pack!

All in all a great day out, more great experience and very encouraging. With the triathlon season about to kick off and no bike racing for a while (apart from our weekly, local crits), I hope to hit the late summer races a lot stronger. Thanks as always to 3Sixty5 Cycling for supporting me this season, and for making great wheels!