While the rest of the world is starting (or ending) duathlon and triathlon season, up here in the great white north of Canada, running season is kicking off. Forest City Road Race has been a consistent one for me for a few years now, so it’s become my PB target. With it taking place at the end of April, I thought I would hit a random 10k this past weekend as a test drive. The Run for Retina Research seemed like a good option with a similar course profile (just the odd, small rise).

This “off-season” has been hands-down my best yet. Past years I have been plagued by injuries over the winter (hamstring, knee, shoulder, fractured ribs), but this year it was just pure training. Although the swim was the focus, with 5 per week, and the bike second, 3 per week, I still managed 2-3 runs per week as well. In particular, I rarely missed a Sunday long run or a Tuesday track run. As indicated by my January calendar from Strava below, I was having no problems hitting 1.5 activities per day, and setting a streak of PR’s. So, expectations for the run were high, to say the least. I did a 2-day taper, zero training and kept the feet up most of the time.

The goal was to hit 40 minutes dead on (previous PB was 39:58), with the plan to feel good doing it and therefore knowing I could PB the same distance in 3 weeks time. There were several young guns out so I lined up just behind them, and set out just over goal pace as I knew I’d need to bank a few seconds for some sharp little rollers at mid-race where the river-side trail kicks away from the river and back. Having not run off a taper for the whole winter, my legs felt feather-light for the first 4k. In fact, they felt oddly not present at all…like I was floating along.

And then, well, I think the pace graph explains well what happened next: 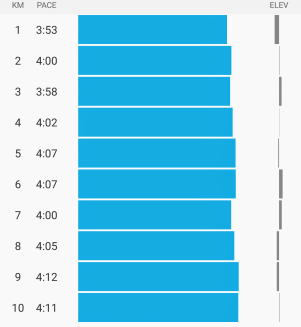 Simply put, I faded. Dead on pace at the turn-around, with legs still feeling fresh, the lungs started to give in. A young guy I had passed around the 3k mark came back to me and we ran together for about a kilometre. Then, turning into a headwind, he gapped me and I let him get away. This proved a bad move as he finished right near 40 minutes and would have offered some shelter from the wind.

I came in happy with my placing overall, but disappointed to be a minute shy of what I thought I should be able to do with the training. On the plus side, I came in second in my age group to my friend Spencer Summerfield, who is a top tier duathlete and a good man to share the podium with. 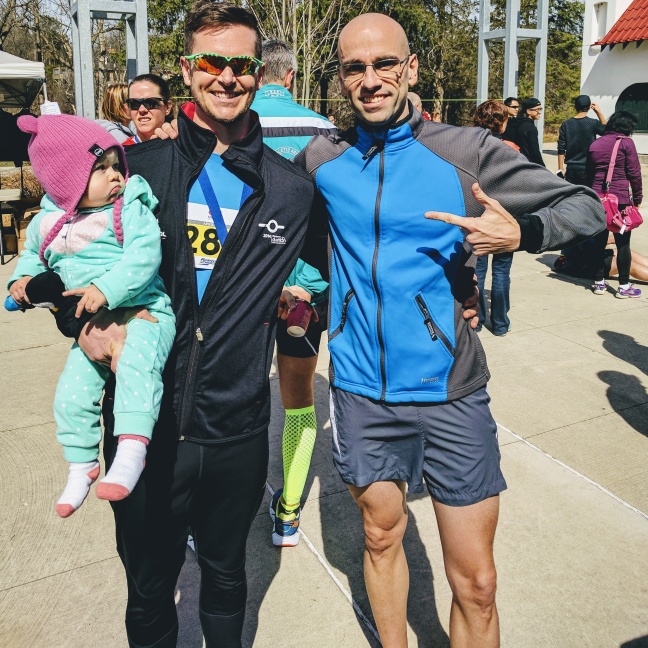 Why? Why when I’m 4 pounds lighter than last year, 100 runs more trained, having done heaps of swim, bike, and run intervals, and more experienced with racing, did the lungs give out on me? Having gotten into this triathlon action 4 years ago at 31 years old, I have been basically racing a streak of PB’s. I wasn’t mentally prepared to do anything less this time around. Maybe I trained too hard the week before? Maybe it was windier than usual? Maybe something slipped with my form? Somehow all of these though don’t seem to explain a whole minute. Ultimately, I’ll never really know.

So, 3 weeks to go until the Forest City Road Races 10k. I’m not sure what to expect now, nor really how to approach the training. Should I pull off another pound or 2? Should I taper more? I guess I’ll just stick to the training schedule and see what happens…